Why I Study English: Leehu Sigler 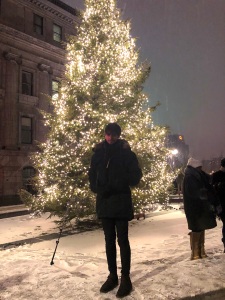 I study English because English is dangerous. I realize how unintuitive this statement may be for many today. However, after studying English for the past five years, I have come to understand the accuracy of this claim. Let me back up a few years. Like many other English students, I love to read. As an 8-year-old, I was always holding a book. Typically, I was also heavily influenced by the books I read. I wanted to be a wizard, face in the Harry Potter series; I wanted to be a detective, reading through Sir Arthur Conan Doyle’s Sherlock Holmes; I wanted to be an interstellar soldier, zipping through Ender’s Game and its many sequels. Every book I picked up dictated exactly what I wanted to be.

While identifying with an especially cunning and intelligent protagonist, I attempted to adopt the masterful rhetoric that was so enticing to me. When the characters were exceptionally brave, I found that I could tackle the problems I encountered in day to day life with higher self-esteem. However, their influence was not always positive. When my heroes broke down, I was just as miserable, as small, and as insignificant as they felt. When the protagonist was evil, I wanted to be evil as well. As I grew up and encountered more children, I was utterly bewildered to discover that I was not unique. I came across others who were similarly affected by the books they read. Moreover, after entering university I was amazed to discover that it was not just my friends and myself who were influenced by authors. I found out that many figures throughout history had been as well!

As part of my assigned reading as an English undergraduate, I read Plato’s Republic, Sir Phillip Sidney’s Apology for Poetry, and John Milton’s Areopagitica. These texts were all participating in the same debate on the influential power of literature: whether or not literature should be controlled, to what extent, and how. I was compelled. I kept studying, discovering how many soldiers ran into the battlefields of World War I dreaming they were Achilles and of the Romantic narratives that contributed to the radical nationalism of World War II. I could easily understand the enticing qualities of these stories. I found the arguments concerned with the influential power of literature even more relevant today, a world in which media and narratives govern day to day experiences through bulletin boards, Netflix, and social media. Curiously, I found myself constantly thinking about one question in particular: how dangerous are books?

As I progressed in my studies, I grew more aware of the stories I had been consuming and their effects. I could better understand Plato, who advocated for the banishment of poets on the grounds that they were a dangerous influence on readers, especially on the young and impressionable. I realized that contemporary arguments over children’s access to video games and violent films were all participants in this ancient debate. Plato had argued that for the unaware, literature, stories, and narratives could be extremely dangerous. I could identify with his argument simply by thinking about myself, and the children that I might raise one day.

Convincing as they were, these claims would not dissuade me from allowing my children to read. Nevertheless, they were too persuasive to disregard. I came to realize that in order to mitigate the harmful potential of stories, I would encourage my children to read more and to think more about what they were reading. Rather than isolate my children from poetry, I would want them to become informed readers. My studies taught me that Milton’s Areopagitica was practically encouraging the same. Effectively, I would be encouraging them to study English.

These musings consolidated after I finished my undergraduate degree. English graduates are often categorized as ‘critical thinkers,’ ‘well rounded citizens,’ and ‘creative.’ By encountering the dangers associated with the texts we study, I came to understand why these qualities are attributed to us. I could now see clearly the harmful potential of my earlier reading practices. However, the in-depth reading practices of my studies revealed that Achilles was not simply a hero, but also a marker of the Iliad’s resistance to war. Similarly, I learned to uncover alternative ideas from the Romantic texts I was reading, elements that did not merely promote nationalization, but could resist such sentiments. I did not simply learn the dangers of literature, but how to read contrasting and often redemptive qualities in texts as well.

I recently encountered an article written for the Los Angeles Review of Books which uses war as an example to comment on readers’ susceptibility to highly popular narratives. Quoting George Parker, a staff writer for The New Yorker, Roy Scranton writes: “Journalists and historians have to distort war. In order to find the plot — causation, sequence, meaning — they make war more intelligible than it really is.”[1] While these sentiments ring true, I would modify them slightly: shallow reading practices “make war more intelligible than it really is.” To English students and graduates, this intelligibility is often suspect. We have the tools to critically question and engage with these texts. We tease out different perspectives that may contrast the obvious and we can explain the effects of such tensions. War narratives are only one provocative example of the harmful potential of texts, narratives, and stories. English students and graduates are trained to redeploy skills acquired throughout their studies in a variety of different contexts, from Harry Potter to YouTube commercials.

Why then do I study English? Before I started my studies, I would claim that studying English would allow me to read more, dive further into my favourite stories, and encounter others who are similarly enthusiastic. English has absolutely granted me these opportunities. However, my studies have also made me aware of the harmful potential of the influential stories I thrive on while granting me the skills to mitigate those dangers. If, as Milton rightfully stated, books are dangerous, “how can we more safely, and with lesse danger scout into the regions of sin and falsity then by reading?”[2] It is precisely because of these dangers that I study English today.